After more than a decade of effective counter-piracy operations, the shipping industry has removed the ‘Indian Ocean High Risk Area’ (HRA). Notification of the removal of the HRA from 1 January 2023 was forwarded in a submission to the IMO.

The piracy situation has shown a significant improvement in the region due to collaborative counter-piracy efforts by regional and international stakeholders. No major piracy attacks against merchant ships have occurred off Somalia since 2018. Measures by military, political, civil society and the shipping industry, as well as BMP guidance, have reduced the threat of piracy in the Indian Ocean.

Industry bodies such as the ICS, BIMCO, IMCA, INTERCARGO, INTERTANKO and OCIMF have informed the IMO of this decision. The removal of the HRA will come into effect at 00:01 UTC on 1 January 2023. This will allow charterers, shipowners and operators time to adapt to the changed threat from piracy. Ships must continue to follow BMP for the necessary guidance to mitigate the risks presented by remaining security threats in the region.

The shipping industry will continue to monitor and advise on maritime security threats to assist the safe transit of ships and seafarers, as well as considering the latest maritime security information from organisations supporting the Voluntary Reporting Area (VRA) during pre-voyage threat and risk assessments. Risk assessments should be carried out before every transit through the Indian Ocean region as it can present a changeable and often complex and potentially threatening environment.

There is no change in the VRA administered by UKMTO. Ships entering the VRA are encouraged to report to the UKMTO and register with the MSCHOA in accordance with industry BMP. 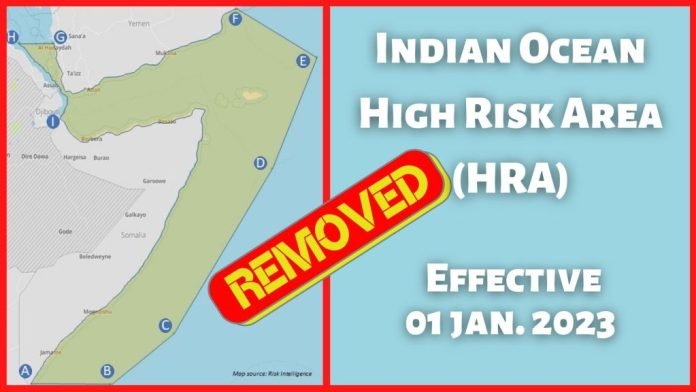